Definitely one of the better “science” fiction books I’ve read, simply because the science in this book seems viable and not too far fetched. The book is written mostly in journal entries, which upholds the bleak tone of the author while keeping the reader engaged.

This book has no romance, little to no self-reflection and reminiscing, and is pretty much all about one astronaut’s will to survive. It skips the cliche ending with reunions between family members and astronauts, and simply focuses on the intellect that a team of astronauts shows in dire situations. 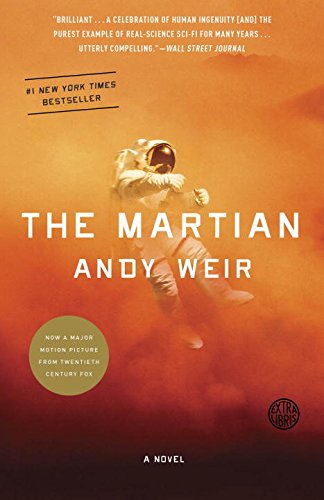 Mark Watney was one man of a crew of astronauts that were supposed to land on Mars, but after a large antenna fell on him during a dust storm and separated him from the rest of his team, they were forced to assume he was dead and leave him behind.

Several weeks later, Mark has built his own potato farm, and is living in his team’s base with enough food to last him a year, but not more. He figures out how to contact Earth and manages to get their help on how to live long enough until the next ship comes to Mars in four years.

But when one attempt after another fails to get Mark the supplies he needs, time is running out and he doesn’t have any option except to make the most treacherous journey of all: a 3200 kilometer trek to the location of the next Mars landing site.

If you enjoyed reading this book review, be sure to hit the “like” button and check out my other book reviews. Over 250 to choose from!

If you would like to read this book, you can purchase it here: The Martian

5 thoughts on “Book Review: The Martian by Andy Weir”